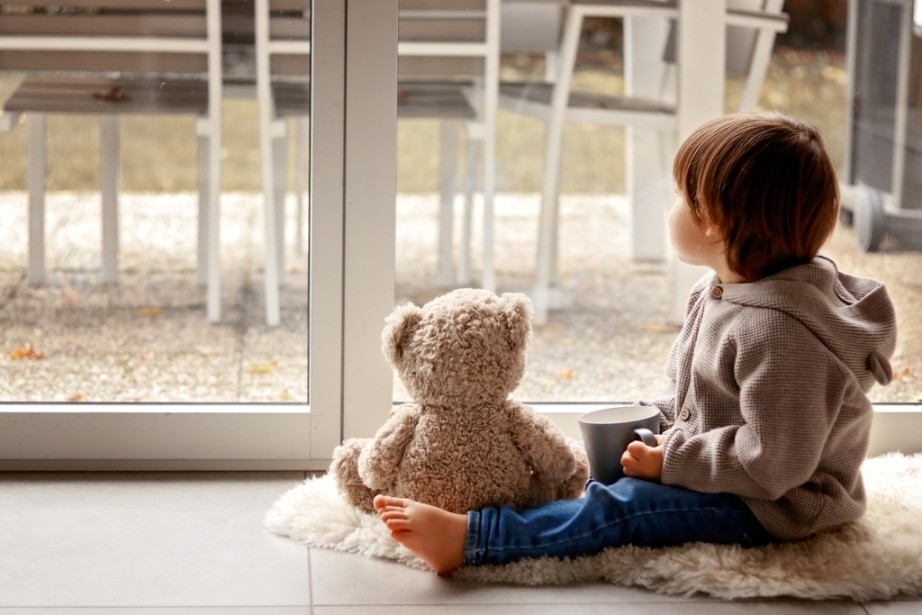 What is window film?

Window film is a multiple-layered, yet thin material made of polyester or PET (Polyethylene Terephthalate). The layers are laminated together and treated with reflective and scratch-resistant coatings.

Some of the layers are clear while others can be dyed. The layer that contains a metal or ceramic coating helps to reflect heat and absorb energy. Usually, window film is applied to the inside surface of windows. An adhesive on one side of the security film bonds the film to the window glass.

What does it do? 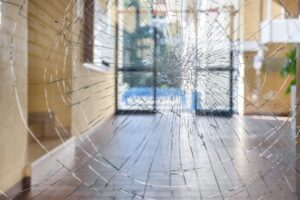 Window film provides protection from natural disasters like hurricanes or tornadoes as well as helping to keep your windows safe from burglars and shattered glass. There are different films for different applications. Some help with heat control, others aid with security, and some are simply for decorative purposes.

In this article, we will be taking a look at security window films and deciding which ones are currently the best on the market.

How do window films work?

When a pane of glass is struck, the glass will break into sharp fragments. Window security film stops the glass from breaking by holding the fragments in place. Shards of glass can cause terrible injuries so preventing breakage is very important.

Thickness of the film

Security film varies in thickness from 4 mils to 15 mils. The thicker the film, the more protection. Generally.

There are some high-quality security films that offer the same protection as the thicker films but are much thinner themselves.

For security purposes, it’s recommended not to go thinner than 8 mils.

Some films use static to stick to the glass while others need to be glued to the window surface. Static films tend to be easier to apply and also to remove.

The only problem is that static security films are often lightweight and offer less effective protection.

Thicker films come with an adhesive side. They are more permanent as well as weather resistant (which is important if the film has had to be installed on the exterior of the glass pane). These films are more difficult to install and tend to be more expensive to purchase.

What are the best security films out there?

Now let’s take a look at some of the best window films on offer. 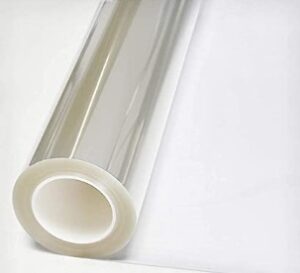 We have chosen this film as the best film overall. The 8-mil security film gives you a lot of bang for your buck. It provides great strength and is still relatively inexpensive.

This safety film will prevent fragments of glass from flying around if the glass gets broken and slow down intruders long enough that they will probably give up trying to get through the window and never actually enter your home. Installation tools (a cutting tool and a squeegee) are included when you purchase the film.

An installation video is provided to assist you and recommend that you use lots of water during installation because the adhesive is very strong.

The only thing that is against this product is that does visibly dim your window.

You can find this film for sale on Amazon

This safety film is great if you have a tight budget. The 4-mil has the lowest price on all its roll sizes compared to the overall selection of films.

If you feel like you can only afford a 2-mil film, think again, this is a great option to get a thicker film for an affordable price. A cutting knife and a squeegee are included.

Again, the only con with this product is its light transmission. It is lower than other brands but it won’t spoil your view.

Find it on Amazon 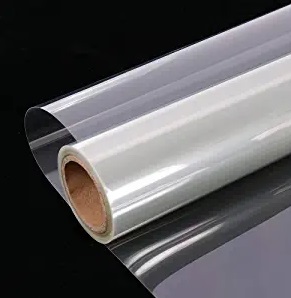 This film provides the best value if buying in bulk which makes it ideal if you have a large project like a storefront. Installation is easy.

The window film is self-adhesive. It has good light transmission which means no visible dimming of the window, however, this does mean that it doesn’t provide as much protection against UV rays as other brands.

Also, this film only comes in 2-mil thickness which means it’s not the best in protecting you against intruders, but it will protect you against flying shards of glass.

You can purchase this product on Amazon 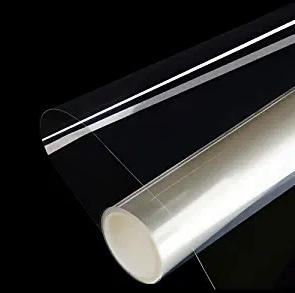 This clear UV security window film is shatterproof and explosion-proof. Made of PET it will stop glass from exploding thus reducing the likelihood of injury if the glass suffers an impact.

It has a wide application including sliding patio doors. It has a self-adhesive application, but it is not a strong adhesive which means it can be easily removed and won’t leave a residue.

You can find this film for sale on Amazon

We feel that this film has the best impact resistance. This film has a 12-mil thickness giving it a very strong resistance to impact.

A burglar will seriously struggle to get through this stuff. Even though it is so thick, this window film still has 90% visible light transmission which means you get safety without sacrificing your view.

The price for this security film is a bit higher than most but you are getting great security, so we feel it’s worth it. No installation tools are included with this product so that will be an extra purchase on top of the film itself.

The negative with this product is that it seems to not stick as well to windows as BDF so even though it’s a thicker film it might be better to go with the BDF 8-mil security film.

Take a look at this film on Amazon

We chose this as the best heavy-duty safety window film. Easier to find on their website than on Amazon, this well-established company produces a great security film in varying thicknesses and sizes.

It is a bit more expensive than other brands. Their 12-mil safety film gives you a very high level of protection for your windows.

The thickness of the film makes it quite difficult to cut and install. It is recommended that you take out the pane of glass you wish to film and reinstall it once the film has adhered to the glass. 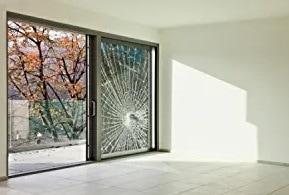 If you want to secure your patio door glass, then this is the best product for you. Sliding patio doors are especially vulnerable to breaking and BurglarGARD provides enough film in a kit for a pair of patio doors.

It is recommended to use professionals to install this film. This film can be quite expensive as it’s designed to be strong while not being too thick. The 7-mil option is an easier install than some of the other films.

You can find this film on Amazon

They have a wide selection of roll sizes but only offer a 2-mil film thickness. This does mean that it’s a cheaper option but obviously offers less security.

Are there other benefits to window film?

While we have touched on a few of the added benefits of safety film, let’s discuss them in a bit more detail.

This is obviously our primary concern and as glass is generally the weak point of your house it makes sense to protect it from breaking.

Even if you have sophisticated locks on your doors, they won’t help much if the glass on the door or beside it can be broken easily. Window security film will make the act of breaking the glass much more difficult giving you the time to react and call for help. Some films are shatter-proof and some are even bullet-proof.

Security window films can help with window privacy. Living on a busy road with lots of passersby can feel a bit invasive. Privacy film doesn’t block out the light like blinds or curtaining but still gives you the privacy you desire. 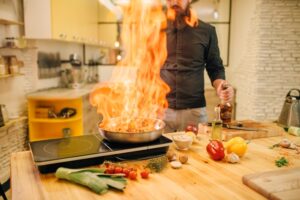 In high temperatures, glass panes will break into large sharp fragments. This is very dangerous for those who might be standing near the window at that time. These fragments also make exiting the building much more dangerous. Security window film will keep the glass in place making it easy and safe to exit and get to safety.

An explosion will cause glass to shatter. The sharp pieces then fly everywhere causing serious damage.

Even if the explosion happens down the street or at the neighbor’s house it could still be strong enough to shatter your glass. Widow film will prevent this catastrophic damage and hold the shards of glass together.

The vibrations caused by an earthquake can break your glass. If you live in an area prone to earthquakes it is a good idea to reinforce your windows with security film.

Window film helps to prevent heat loss in your home. Forty percent of heat loss occurs through doors, windows, and floors. Safety film can increase the heat loss efficiency of your windows by as much as 25%.

The film will both reflect and absorb heat from the sun. It acts as an insulator in much the same way as the insulation that is in your wall or ceiling. Window film will help keep your home warm in winter and cool in summer.

The UV rays of the sun are the primary causes of fading of floors, furniture, curtaining, and walls. No window film can totally block out UV rays but they do help in slowing down the fading process.

• Clean the glass thoroughly before installing the film. If there is any dust or bits of paint around the rim it will make the film bubble and look untidy.

• Don’t pre-cut the film. Make sure you cut an extra inch or two off the roll and trim the excess once the film is on the glass.

• Use something flat (like the edge of a bank card) to smooth the film on the glass so that air bubbles are pushed to the edges of the glass and wrinkles are smoothed out.

• Use lots of water! One of the most common installation mistakes is not using enough water. Have a towel handy to catch the drips.

Window film is an ideal way to inexpensively add security to your home and protect windows.

You will sleep easier knowing that the most vulnerable entry point in your home is now secure once you have installed a safety film.

There are a lot of options out there and we trust this article has helped you to decide which one you should purchase.